One of the oldest football grounds in the country, Stamford Bridge, in Southwest London first opened as a sporting arena in April 1877. In 1905, the stadium became home of Chelsea Football Club and has since been subject to a wealth of improvements aimed at providing spectators the colossal, 41,000 capacity stadia experienced today. Looking to pursue further experience enhancing developments for fans and spectators alike, Chelsea FC reached out to the Bendac Group for an innovative, bespoke LED solution for upgrading the scoreboard displays at the grounds. Bendac, having already engaged in extensive custom projects world-wide, welcomed such an influential project so close to home ground and kicked off with a soundly designed a plan of action.

At the time, the project itself was Bendac’s largest turnkey solution at this level. CFC tasked Bendac’s team with the removal and replacement of the existing North and South displays in order to increase size and enhance viewing for fans. The installation utilised InfiLEDs LMKII series- a display prime for outdoor broadcasting. The LMKII hosts a variety of features suited to this type of installation, including a pixel pitch of 10mm to elongate viewing distance, a brightness of 5000nits ensuring viewing on bright summer days and an IP of 65 to guard against the harshest of elements in addition to any over-enthusiastic free kicks. 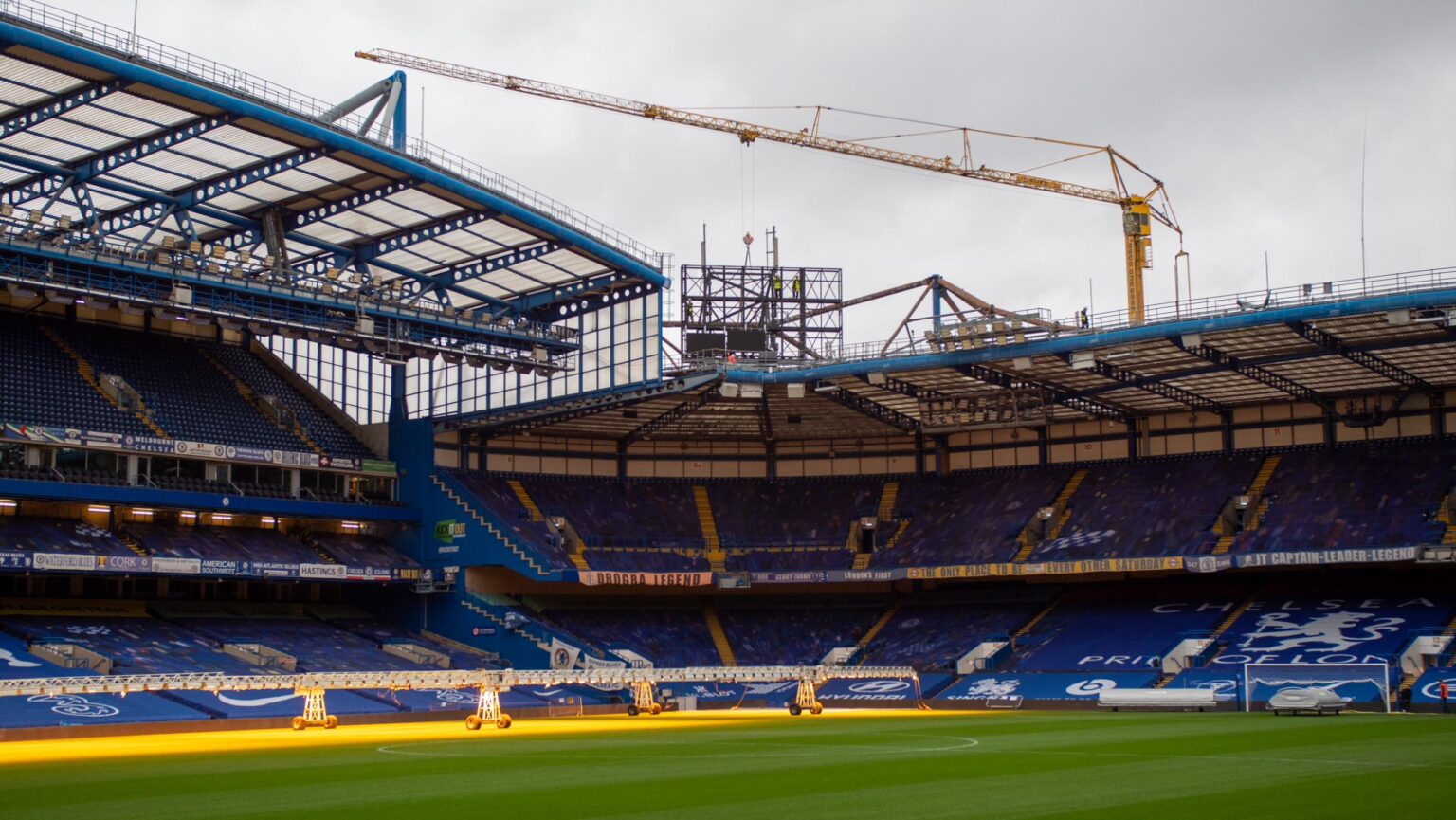 The LMKII goes on to provide seamless screen building and rolling fast locks allowing for ease of assembly as per requirement, as well as featuring a separate power control unit design- designed purposely for easy maintenance.

In total, 117 cabinets were removed, and 256 cabinets installed in their place- 128 cabinets per screen. The extra cabinets accounted for a width increase of over 2.5m (7.68m to 10.24m), creating a new aspect ratio of 16:9 and in turn, increasing the dimensions of the structural framework (which Bendac also engineered) required to mount the screens.

The project was large and not without obstacles. Even with careful and precise planning, a variety of challenges presented themselves during the installation, though this did not stop the Bendac team from delivering a premier service. In response, Bendac worked collaboratively with external contractors – as well as established structural engineering colleagues – to overcome a variety of logistics set to cause potential complications.

Due to the stadium grounds being well maintained, it was prohibited for any of the work force or their tools to access the pitch itself. This seemingly small hurdle required extensive critical thinking from both Bendac’s Engineering and Project Management teams, who after careful consideration, enlisted HIRD- a crane hire company who could provide plant equipment appropriate for the manoeuvre. Additional aid was provided from our associates at structural engineering company, CIS, who played an integral part in assisting the Bendac engineers by facilitating the widening the existing structural framework for both North and South screen and finally, Wiltshire based scaffolding company, Melksham Scaffolding were enlisted to provide a platform around the South screen from which Bendac’s installation team could complete the project. 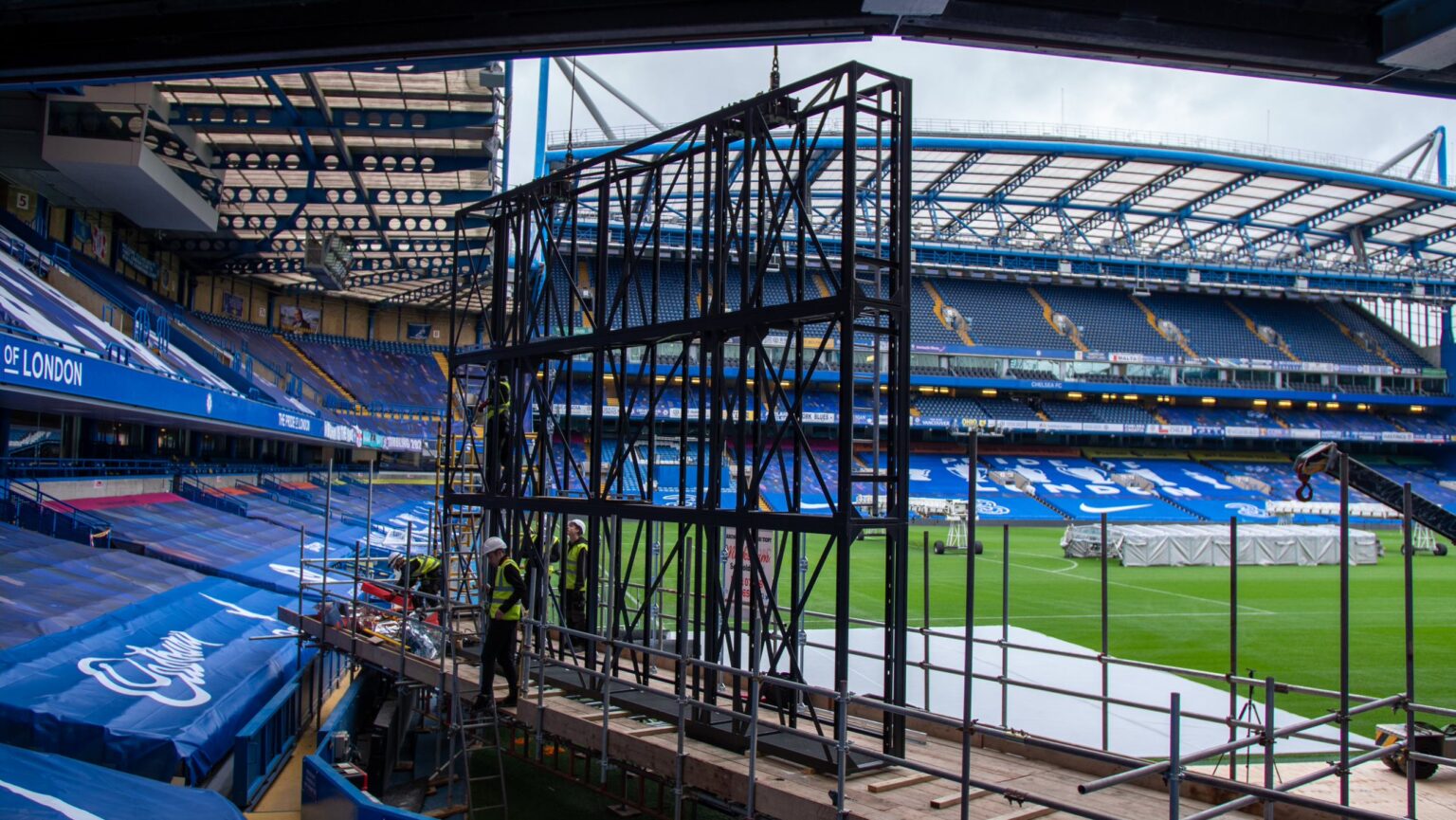 To assemble the North screen, a self-erecting Tower Crane – parked on the road outside of the stadium bowl – spent an afternoon lifting cabinets up and over the stadium, whilst the South screen required a tailored plyboard road running alongside the pitch allowing access for a smaller Valla Crane to manoeuvre the displays to the work platform.

The South screen presented the most complexity during the installation. Usually suspended on a winch, the old frame was dropped to the scaffolding platform below and the screen partially built from this height, however widening the frame to accommodate new sizing meant that firstly, the weight load increased drastically and secondly, the winch was unbalanced and no longer centralised, rendering the load unstable and unsafe.

In order to overcome these existing infrastructure limits, Bendac’s engineers used load cells to decipher the exact weight, finding the winch was surpassing max load and in turn, responded with turnbuckles and shackles to provide extra support for the displays. Then introducing an eccentric load to even the weight disparity, our engineering team attached 1.5 tonnes of water to the right-hand side of the screen to balance the weight of the existing screens, forcing the winch back to a central position. A partial number of cabinets were fitted from the scaffolding platform using this method, with the screens raised off the platform and up into the rafters where the team completed the installation from height once the load was stable. 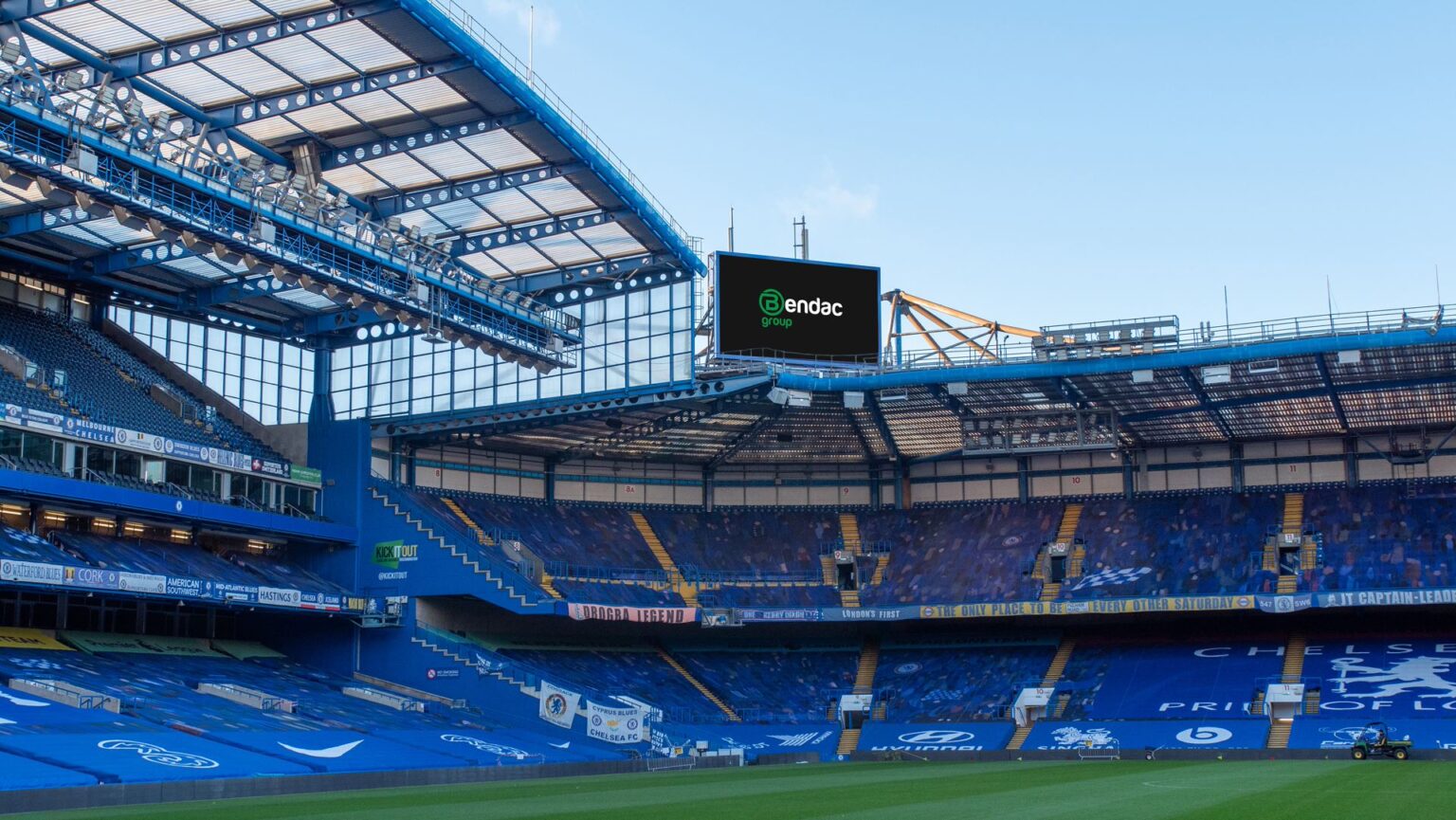 Completing such a large project at an in-use stadium in the midst of Covid-19 added significant pressure to the project as whole. The window for installation was very small and a huge amount of planning and innovation was required from Bendac’s team of professionals to devise a solution that would meet deadlines, as well as save significant costs for the client. Costs and shipping were carefully managed by Project Management, who ensured the equipment was accurate and available for the correct days and tight deadlines meant long hours were worked by the engineering team in order to complete the installation within the required timeframe.

Overall an incredible effort from the entire Bendac team has resulted in a successfully completed, large turnkey installation for CFC. Feedback has been exceptional, with interest in the completion of a further turnkey solution on site at a later date. Bendac, as always are in a league of their own. Having delivered a project of outstanding quality at Stamford Bridge, we look forward to continuing to provide intelligent and practical solutions now and well into the future.   ‘